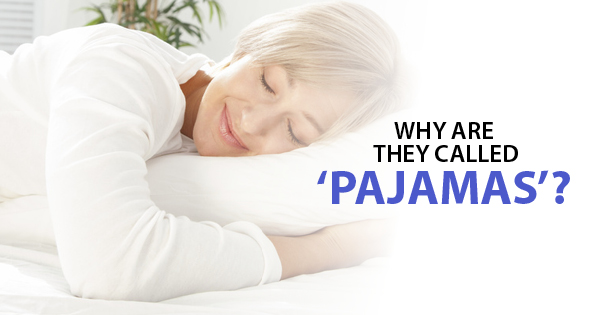 The origins of some words we use in English are fairly easy to suss out. For example, ‘nightgowns’ or ‘nighties’ for short are quite literally gowns women wear at night. The same principle applies to a ‘nightshirt’. But what about ‘pajamas’, the word most modern English-speakers use as a catch-all term for clothing worn specifically for sleeping?

You may have seen quite a few spelling variations such as ‘pajamas’, ‘pijamas’, ‘paejamas’, ‘paijamas’, and the British spelling ‘pyjamas’. The abbreviation ‘PJs’ is fairly common in the English vernacular as well. So where did this funny word come from?

It actually dates back to the Ottoman Empire, stemming from the Hindi word “pae jama” or “pai jama,” which can be literally translated as ‘leg clothing’. Originally, this ‘leg clothing’ was a kind of unisex loose pant fastened at the waist with a drawstring. Although they originated among Hindi peoples in India similar styles were popular throughout India, the Middle East, and Far East.

When the British caught on to these colorful and comfortable unisex pants in the 1800s, rich Victorians adopted the style as casual nightwear. Victorian pajamas were quite distinct from the typical long white nightshirts worn by most classes, and quite a change from simply wearing the day’s undergarments to bed. Even women would wear Turkish-styled pajama pants up into the early 1900s, perhaps becoming part of the gateway into androgynous fashion in the 1920s.

Victorian pajamas were the gateway to more beautiful nightwear. Designers began to add lace, patterned fabrics, and other accents to pajamas. While the conservative Victorians resisted this change at first, the fashion world quickly came around to pretty pajamas and cute nighties.

Fabrics, of course, range from the luxurious and impractical to the simple and sturdy. Silks and embroidery were the height of luxury, but just like today, a sturdy cotton percale is quite popular. For reference, percale is a kind of cotton woven with at least a 200 thread count. It’s more durable and less likely to pill than cotton satin, for example. If you’re looking for a pajama set that authentically mimics the high-fashion Victorians but won’t fall apart after a couple washes, percale is a nice option.

Victorian pajamas are still an influence on classic pajamas today. Classic, cozy pajama sets are a staple on American winter mornings. If you’re the type who enjoys flipping through Dickens novels on a frosty December day, consider investing in some vintage-styled pajamas to lift your spirits.